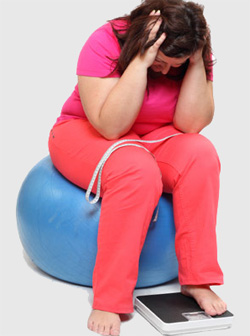 Environmental factors
Obesity can be easily attributed to the rhythm that the 21st century poses on people, leading them into a non nutrient diet full of fat and no spare time to exercise. As a consequence, the daily food intake along with the quality of food may result to obesity.

Psychological factors
People often indulge into eating after emotional distress, such as sadness, boredom or anger. This psychological disturbance often lures people into the false perception that by eating they can overcome these negative emotions. This is referred to as the binge eating disorder and leads to not being able to control the amount of food consumed and having difficulty in losing the excess of weight gained.

Medical factors
There are various types of disorders that could have as a result obesity. Such disorders may be hypothyroidism (slows down the metabolic rate of the organism leading to fat accumulation), which is a frequent disorder in the Eastern Europe population and can be treated successfully nowadays. Insulinoma, in which the pancreas is forced to produce excessive amounts of insulin leads to fat accumulation and therefore, obesity. Alternatively, pharmaceutical treatment, such as steroids and antidepressant drugs can also be a cause to obesity, due to lowering the body’s metabolic rate.

Inheritance
Genetic susceptibility can also be a cause to obesity. However, in this case it may be difficult to determine whether obesity is the result of gene sharing through the same family or a result of following common dietary habits and lifestyles. However, there are genetically inherited disorders that lead to obesity, most common of which are Prader-Willi syndrome, Cushing’s syndrome and Laurence Moon-Biedl-syndrome.